Highest and Best Use in Commercial Real Estate

What is the Principle of Highest and Best Use?

The Four Tests to Determine Highest and Best Use

When looking at the highest and best use (HBU) of a property, the potential use must meet four tests in order to qualify as an appropriate HBU. Specifically, the use needs to be physically possible, legally permissible, financially feasible, and maximally productive.

The size, shape, and condition of a property must reasonably allow its highest and best use. For example, an office building with a 20,000 sq. ft. footprint would not fit on a 10,000 sq. ft. site. And, a building planned with a large basement or below-ground area could not reasonable be constructed in area with a high water table (i.e. South Florida).

In general, this test refers to zoning and building regulations, which typically limit the size, footprint, and use of a property. Appraisers likely already have a deep knowledge of the zoning rules in the area in which they practice, but regardless, this information is easily accessible. This test may also include environmental laws and regulations, which work to ensure that a building does not have a particularly negative impact on the surrounding environment. For larger projects with a high degree of profit potential, developers may wish to pursue a zoning exception, also referred to as a variance, with the appropriate city or municipal body. To be successful, however, they must typically demonstrate that the project will lead to significant economic development or other benefits to the surrounding community.

To determine how financially feasible a proposed property use is, an appraiser would attempt to examine it as it if it were already in existence, by creating pro forma financial statements. To do this, they would need to conduct a full market analysis, estimate development and construction expenses, OpEx, potential cap rates, vacancy rates, and a variety of other factors.

With all this information, an appraiser can create an estimated IRR (internal rate of return), in order for potential developer or investor to determine whether it’s sufficient for their return requirements. By using discounted cash flow analysis, an appraiser can also calculate the net present value of a property with a specific required return in mind. If it’s above zero, than the property exceeding the required return.

While it may not necessarily be calculated by the appraiser, developers can also do some quick math to determine a project’s potential equity multiple over a specific time horizon. Both of these metrics can be calculated in an unlevered (without debt) and levered (with debt) fashion. In certain cases, developers may also look the estimated residual land value of a property after potential improvements.

After examining the potential uses for a property that are both legal, physically possible, and financially feasible, an appraiser will rank them based on risk adjusted returns. In many cases, the options with the highest potential for returns will ultimately be too risky for investors, so appraisers often apply a discount rate based on risk to adjust a property’s IRR.

The Four Highest and Best Use Categories

After examining a property based on the four tests mentioned above, an appraiser will be able to determine which of the four general HBU categories it fits into. They include:

Applying Highest and Best Use to Vacant Land or New Construction

The principal of highest and best use can be used for either vacant land or land with existing improvements. For example, if we were to examine a vacant lot and determine which type of property would generate the most profit at sale, we could analyze the profit margins for various classes of commercial real estate (as found in the table below). However, this does not take into account legal permissibility, market demand or risk ( for example, hospitality properties are generally far riskier than multifamily apartments). All other things being equal, however, if the example below were true, hospitality would be the highest and best use of the property, followed by residential, commercial, and retail.

Applying Highest and Best Use to Property With Existing Structures

To demonstrate how highest and best use can be used for a property with an existing structure, let’s say that an older building in a mid-sized metropolitan area is currently being used as an apartment building. While rents have not greatly increased, the city has seen a massive influx of tourism in recent years, and there’s a substantial demand for hospitality properties. The building is $15,000 sq. ft. with a vacant land value of $15/sq. ft., bringing the vacant land value to $225,000. As apartments, the building generates $20/sq. ft. of rent, with a vacancy rate of 3%, and operating costs are $60,000/year. If area cap rates are about 8%, we would estimate the building’s current value at $2,875,000. 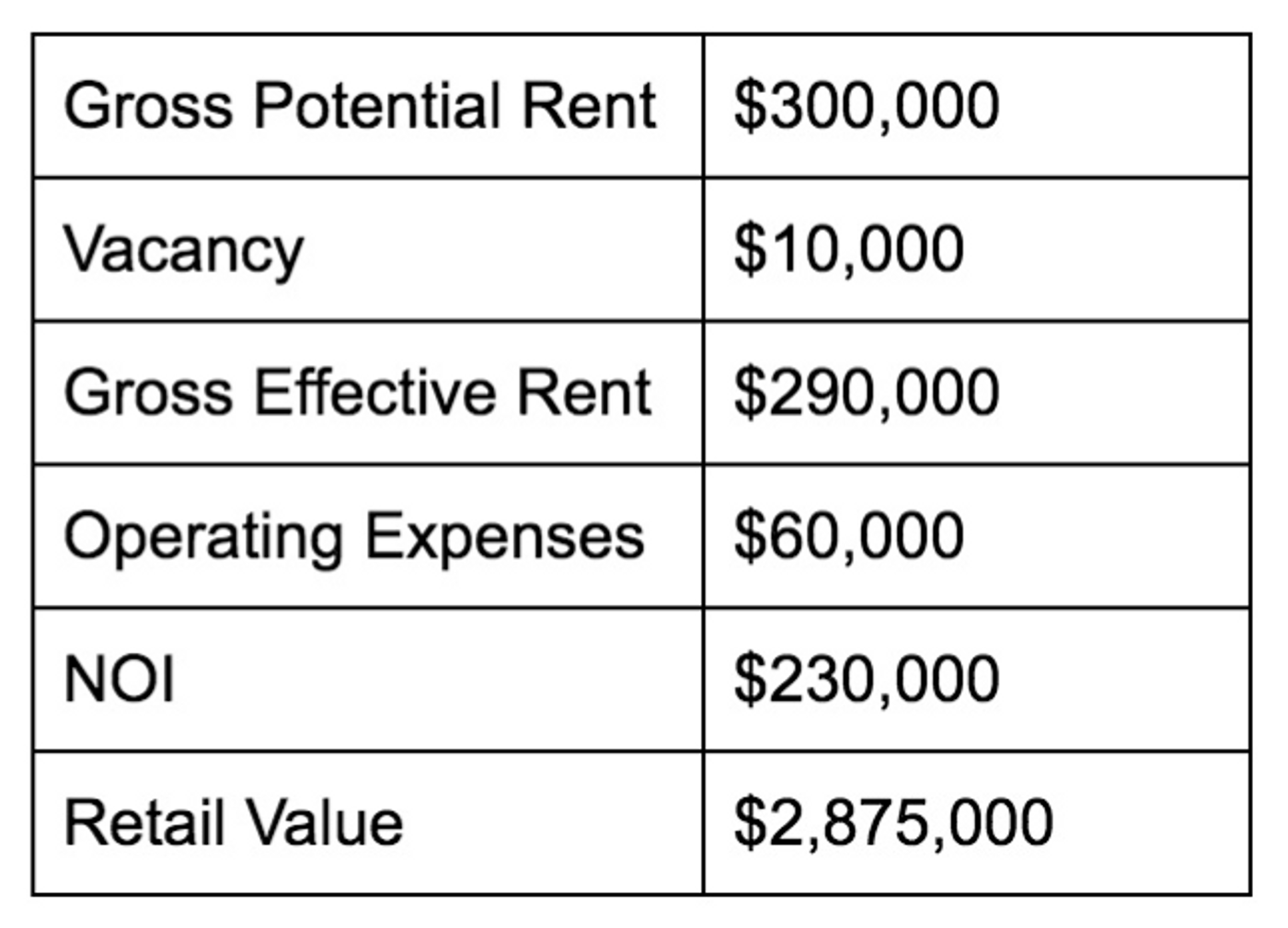 In this example, let’s say that hotel properties rent for approximately $35/sq. ft. Since we already know that it’s an attractive market for hospitality properties in the area, an investor/developer may wish to invest into renovating the property into a hotel, which they could then rent to a hotel chain and, within a few years, sell the property for a profit. Converting the property will cost $1 million, and will take approximately 1 year, during which there will be no income from the property. Operating costs are $4/sq. ft. and increase by $0.50/sq. ft. each year.

Assuming we have a regional or national hotel chain willing to sign a 10-year lease with rent that increases 3% annually, we will have zero vacancy past the first year. In the table below, will look at the property over a 6-year period to assess it’s potential profitability. If we also assume that the average area cap rate remains the same, approximately 8%, we can take Year 6 NOI to determine a potential resale price of $6,131,250.

Questions? Fill out the form below to speak with a commercial real estate loan specialist.