Commercial real estate is in store for another great year, according to the panel of Reonomy’s first-quarter webinar, The Current State of CRE. Richard Kalvoda, senior executive vice president of Altus Group, Reonomy’s parent company, facilitated a discussion on the current landscape of commercial real estate, discussing timely issues from inflation to the potential impacts of interest rate increases.

Overall, total quarterly returns across property sectors hit 6.6% for stabilized assets in the fourth quarter last year, among the most rapid growth on record. This was led by major appreciation in assets, according to Kalvoda, which accounted for 5.6% of the return.

Different asset types fared very differently, however. Industrial, long the darling sector, outpaced all other property types, with returns around 15%, followed by multifamily returns, which hovered around the 7% mark during the quarter. While office and retail have recovered, growth has fallen far short of that associated with distribution and logistics space and apartments — though the sectors still remain attractive in many areas, depending on location, asset type, and property quality. 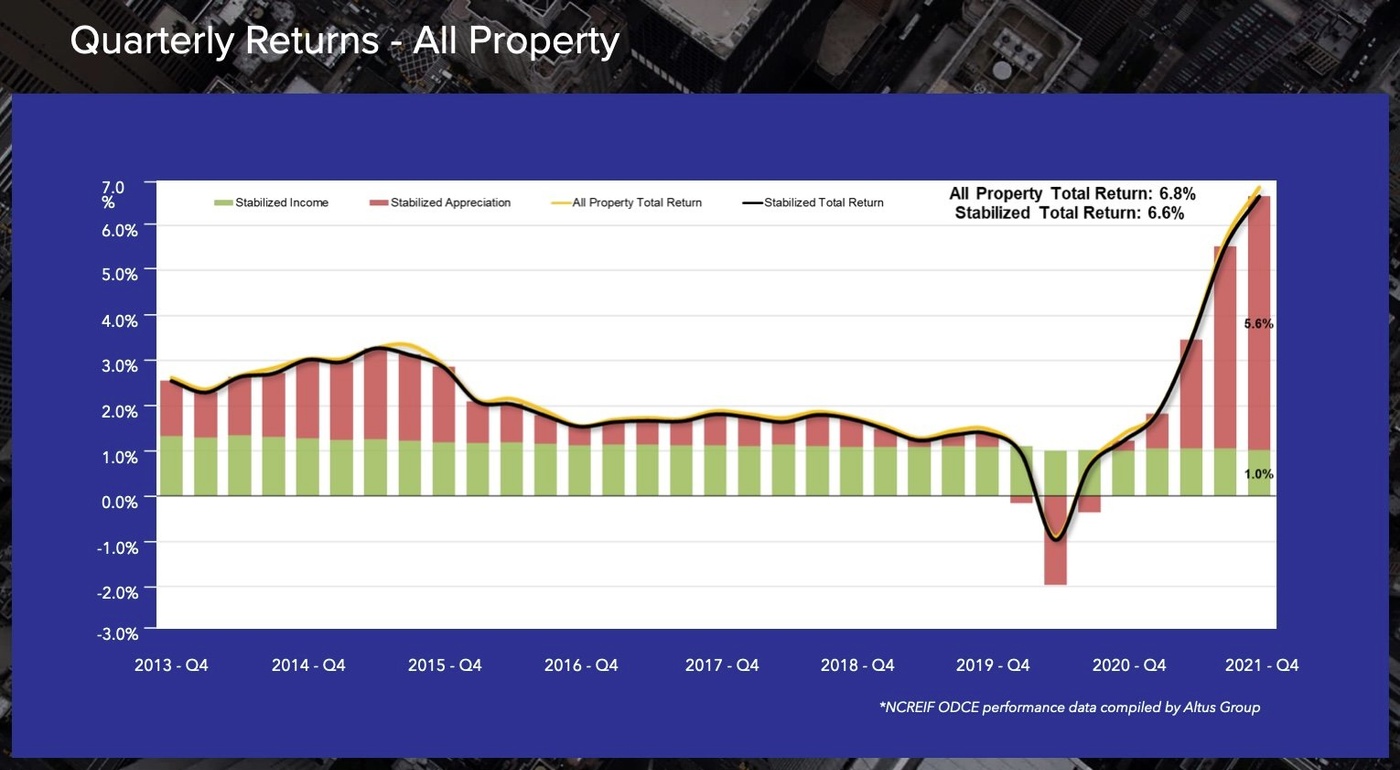 Unsurprisingly, the industrial sector’s strengths aren’t just apparent on a quarterly basis. “It’s just phenomenal when you look at it on a two-year annualized basis,” said Kalvoda, “Essentially through the pandemic period, industrial with a 26.7% total return is just well above the other sectors.”

But will industrial’s gains endure in the coming years? CBRE’s Doyle anticipates they will. He discussed how e-commerce — the largest driver of industrial demand — will continue onward, even if consumer spending isn’t pushed by government policy like stimulus checks. And widely reported supply chain issues may actually drive demand even higher. “The idea of onshoring and holding more stock to mitigate supply chain issues — these are factors that are going to push the continual need for more industrial, more warehouse space,” Doyle commented, highlighting ongoing spikes in demand for last-mile distribution centers.

While the massive development pipeline may give investors pause, the level of demand for industrial space will ensure that all new space is rapidly absorbed, leaving vacancy low across the country.

For context, Brian Bailey from the Atlanta Fed highlighted that Amazon alone has been responsible for leasing more than 100 million square feet per year for the past two years. Yardi Matrix’s January industrial report pegged December’s national vacancy rate at 5.7%, and projects under construction totaled 572.8 million square feet, equal to 6.9% of the country’s inventory. 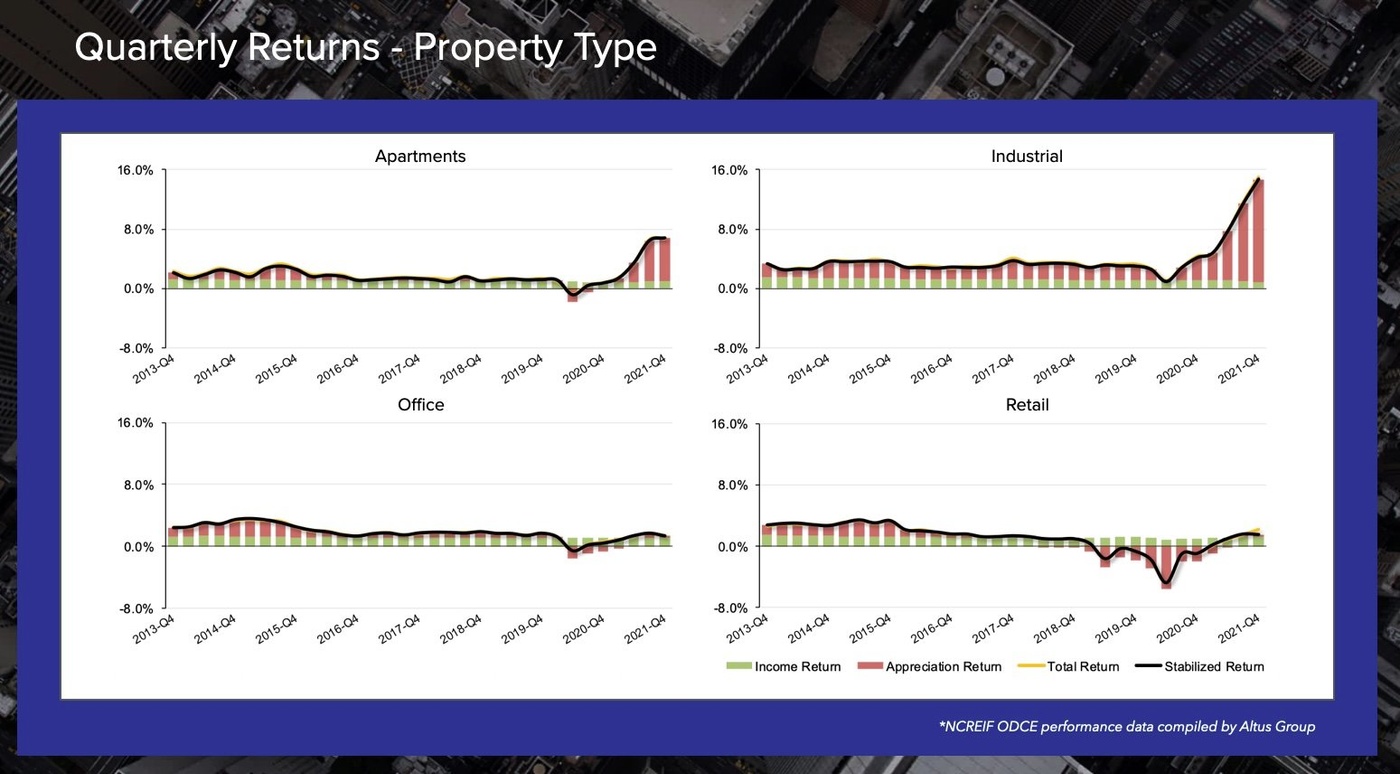 In looking at macroeconomic patterns, all of the panelists noted that commercial real estate is a strong hedge against inflation. As inflation continues to hit 30-year highs — with Russia’s invasion of Ukraine potentially driving the consumer price index even higher, The New York Times reports — investment in strong assets is important, but one thing to keep an eye on is a property’s rent rolls.

NYU’s Savage commented, “The shorter duration the lease, the better the inflation hedge,” carrying on to note that multifamily is a strong mitigator due to the standard 12-month leases at most communities. He also noted that, depending on how office space in urban cores is reconceptualized, coworking or flexible space with typically daily or monthly agreements could also act as an effective hedge.

Doyle noted that, in 2021, two-thirds of new commercial real estate financing packages were floating-rate loans, a drastic change from years past. Savage noted that variable interest structures may make a lot more sense going forward, particularly as LIBOR is phased out in favor of SOFR, but it isn’t yet clear how this may play out during times of economic stress.

In terms of investment patterns, Doyle expects 2022 to look similar to last year — at least in terms of private client investments. He commented that it seems unlikely the 1031 exchange program will change in the near term, and that investors will continually be looking to deploy capital. However, it may not be occurring in the most visible of venues: “If you’re looking for what’s available, you’re probably missing what’s actually happening,” he concluded.